I ask Julie Starbuck, to Search and Rescue Peace River K9, if she remembers a time when she felt particularly proud of Caliber, her German Shepherd.

“The first that comes to mind is when we were called to work in a burnt down building. It had been burned the night before and they were pretty confident someone had died in there, ”she recalls immediately. “The firefighters had been there for 12, 13 hours and could not locate the victim. We brought in Caliber, and it was the first time that she had worked in a building that was completely burnt down, and in about five minutes she found the lady.

“I was incredibly proud of her because she was doing her job in a tough environment, with a lot of debris and rubble and everything, and she knew she was doing a good job,” Starbuck said with a smile. . “She took her toy and went to all the firefighters that was there and had them play tug with her.”

Caliber’s abilities exemplify the vital role dog’s exceptional scent skills play in supporting the work of law enforcement agencies and other emergency services, whether as part of a police team or one of the specialized and highly qualified voluntary organizations.

Types of odor detection dogs that support the police

Police use a dog’s nose to support them in various activities. Training for each discipline is rigorous and expensive, sometimes taking up to two to three years. Most dogs specialize in one area of ​​expertise, detecting specific smells. The training techniques are all similar: A dog learns to associate certain smells with a valuable reward, so it looks for those smells over all others and indicates when it finds them.

You will often see these dogs at airports, train stations, and at large-scale events. Narcotic dogs learn to identify the smells of drugs like marijuana, cocaine, heroin, and crystal meth.

After September 11, bomb detection dogs were increasingly in demand. They identify the smells of some common bomb-making chemicals.

These dogs generally work off a leash in close contact with their owners. It is even possible for them to identify certain accelerators used in arson cases.

Dogs learn to follow or smell the unique scent of a particular individual. They can search for someone who has gone missing under suspicious circumstances or someone who has been lost or caught up in some disaster. You are undoubtedly familiar with the iconic images of Bloodhounds with their noses to the ground, held by a master on a leash, hunting down fleeing criminals.

Scentless, working search and rescue dogs cover large areas of land methodically without a leash, often some distance from their handlers.

There is a growing demand for dogs to help find corpses. Corpse dogs, also known as human remains detection dogs, can find human remains that are hours old or decades old. The remains are often up to 100 feet underground or at the bottom of deep bodies of water.

Kim Cooper from Ottawa Valley Search and Rescue Dog Association has worked with search and rescue dogs for thirty years. She explains that there has been a surprising demand for cadaver dog assistance since they added this profile in 2007. “Cadaver and water searches are skills that police and police dogs often do. do not have. While civilians have trained for this, so it becomes an additional resource that can be brought in. “

Getting the right dogs for the job

It’s no surprise that police work relies on these scent skills as it does. Scientists estimate that a dog’s smell is 10,000 to 100,000 times more sophisticated than that of humans. However, not all dogs are suitable for professional odor detection jobs. Dogs working in the police and for voluntary organizations often come from specific breeding programs.

Cooper explains that dogs need “the inherent motivation to hunt, high energy levels, an obsession with a reward (usually a toy), and a high degree of focus.” 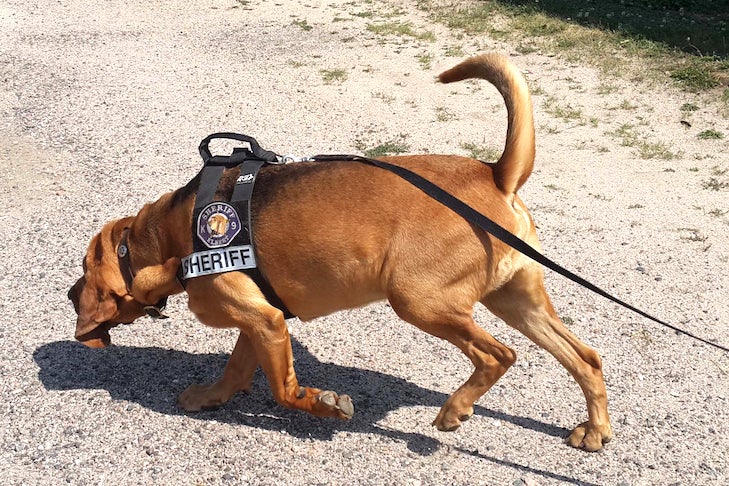 His team had the most success with German Shepherds, but they also certified Labradors, Springer Spaniels, Border Collies, and a Vizsla.

Starbuck agrees, although she recognizes that every dog ​​is an individual. “Some characteristics of the breed are simply inherent in the German Shepherd, Belgian Malinois, and Dutch Shepherd. But I have seen German Shepherds who are real couch potatoes.

She also insists on the importance of a strong bond between the dog and his master, and of a good reward system.

Starbuck is surprised by some of the dogs that have gone through their training program. “We’ve had pretty much every breed you can name, from Catahoulas to Poodles. We had a Saint Bernard at one point, Dobermans, and we even had a Cavalier King Charles Spaniel who was an amazing trail dog before he retired. They currently have a 15-pound Fox Terrier on their team who Starbuck says is a “phenomenal little dog.”

Can my dog ​​and I get involved in this type of work?

Just because your puppy has an uncanny ability to sniff and dig up bones in your yard doesn’t mean he’ll have the motivation, motivation, and physical attributes to work as a canine scent detective.

Cooper recommends finding a local search and rescue team if you think you and your dog might have what it takes. “You can’t do this from a book. You need mentors to help you progress day by day, week by week. Your dog needs a high level of certification and affiliation with a reputable organization for the police to consider working with you, and that takes a lot of training and dedication.

Starbuck says they have “seen some wonderful, what you would call companion dogs, come in thanks to search and rescue volunteers.” As long as the handler can change his state of mind to make him a working dog and realize that sometimes he puts that dog in a situation that can make him uncomfortable.

The 2021 K9 Detection Dog Challenge brings together 20 USPCA narcotics and explosives detector dogs from across the country to test their skills. Watch the exciting event Sunday, November 28 at 10 p.m. EST on ESPN2.