On January 18, 2022, the Johnson County Sheriff’s Office received a walk-in complaint of possible animal cruelty at 6221 Main Street in Mansfield, Texas. This complaint indicated that there were several dogs on the property who were tied up in chains, without adequate shelter, and without food or water.

On January 20, 2022, an additional complaint was filed regarding dogs not having adequate food, water or shelter. A complaint was also filed that the owners of the dogs were a breeder. The complainant was provided with contact information for the Texas Department of Licensing and Regulation to file a complaint regarding dog breeding. A deputy from the Johnson County Sheriff’s Office conducted an on-site inspection of the property. During this time, multiple violations were discovered and citations were issued for failing to comply with state law regarding the illegal restraint of dogs. The dogs on the property were found to have sufficient water and the owner showed dog food on the property.

On January 26, 2022, an additional on-site inspection was conducted and it was discovered that there were still multiple violations that had not been corrected. Additional citations were issued for non-compliance.

On January 27, 2022, another on-site inspection was conducted and violations were discovered. Citations were issued for violations found.

On January 30, 2022, deputies responded to a harassment complaint at 6221 Main Street in Mansfield, Texas. The owner said he was harassed by an animal rights group. A criminal trespassing warning was issued to two male subjects for the property at the request of the owner, no arrests for criminal trespassing were made.

During our last site inspections on February 1 and 4, 2022, there were igloo-style and doghouses for each dog with cedar shavings and hay for bedding. There were secondary shelters which are plywood A-frame style structures as seen in the photos below. It was observed that not all dogs were chained and are now tethered to cable type tethers which meet Texas state requirements. Documents were shown to the investigator which show that a dog is under veterinary care. Another dog is receiving wound care and antibiotics as recommended by veterinarians.

The owner was providing fresh water several times a day due to low temperatures and the fact that not all dogs were chained and tethered by cable-type devices that meet new state requirements. Deputies also checked that the dogs were being fed.

Several photos and videos caught our attention. The first is that of a dog skeleton held by a strap around the neck. This photo was not taken at this property. The second is a photo of a dog with a dilapidated kennel. This photo was not taken on this property. The video in question is of a dog being forced to swim. This video was taken in Arlington by a lake and has been reported to the City of Arlington for further investigation.

A video was posted on social media showing an individual punching and throwing a dog to the ground. A subject has been identified in this incident and is currently under investigation. None of the people in the video mentioned is believed to be the owner of the dog. The owner is cooperating with the investigation.

Numerous allegations have also been made on social media regarding dog fights on the property. There has been no evidence to support this. There was a video of a dog breaking loose from a tether and fighting with another dog, but the law requires the owner to intentionally or knowingly cause this to happen. At the time of the fight, the owners were not at home.

Anyone with videos or photos of animal cruelty or any other violation is encouraged to personally bring those photos or videos to the Johnson County Sheriff’s Office. Videos on social media cannot be used as evidence. All videos and photos must be authenticated to be used as evidence.

Many calls have been made to the Town of Mansfield about this and it should be noted that it is not within the limits of the Town of Mansfield. It is in unincorporated Johnson County and the sheriff’s office is tasked with dealing with this situation and must do so without the benefit of city ordinances. When dealing with these issues in unincorporated areas, our deputies have only limited state-mandated laws. We have enforced all of these laws in accordance with state guidelines, and at this time the Johnson County Sheriff’s Office has not found the required justification to seize these animals.

Comments on the Johnson County Sheriff’s page show how outraged animal advocates are at the situation and the response. 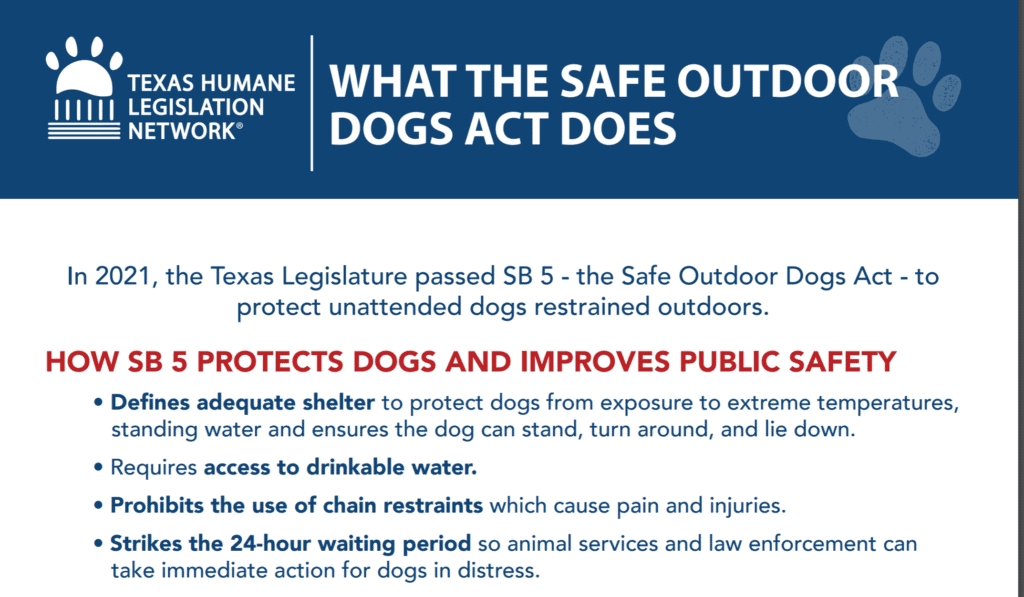 “Look, I hope you contact your state representative and demand that they change the animal welfare laws. I also hope you continue to pressure the Johnson County Sheriff’s Office no only for him to show up to all (all) of these animal welfare situations that he has there, but also to put local animal control in place They are hardcore on crime, but one has the impression that they are completely anarchic when it comes to animal welfare.There seems to be a major lack in the empathy/compassion department when the goal is to protect.

The decision was taken several times to allow this situation to become compliant and ultimately to continue. If you don’t like the way it turned out, use your voice. If you disagree with this form of protection, use your voice. What are your expectations of your elected officials? If the laws aren’t made to protect animals, use your voice.
By the way, I understand the confusion with Mansfield, really. I’ll tell you what, our shelter has been taking some misdirected hits on this for quite some time now. Our refuge manager, specifically. I’m proud that people are standing up, but please do me a favor and correct people when they target our shelter in this case.

I really hope this whole situation brings change to Johnson County. It’s been a long time coming. I hope these puppies get the help they need.