By Eck! Yorkshiremen are the easiest to keep under control, survey finds

By Stian Alexander for the Sunday Mail

By eck! No-frills Yorkshiremen are the easiest to train and tame in the UK, according to a survey.

Nearly a third of women in a county famous for its outspoken men, such as cricketing legend Geoffrey Boycott, actor Sean Bean and TV presenter Jeremy Clarkson, say they have ‘run in’ their male partner in the year following the start of their relationship.

By comparison, just 12% of those polled in the South West said they had done so, compared to around a fifth in Scotland and Wales.

Yorkshiremen are the easiest to train and tame in the UK, according to a survey commissioned by natural dog treat brand Pooch Snax

In the UK, around a quarter of 2,000 women surveyed said making sure their husband or partner was ‘obedient’ and ‘easy to shape’ was a top priority.

Mother-of-two Veronica Bowman, 36, from Keighley, West Yorkshire, considers herself to be one of those women who has her other half – in her case, building foreman Mike – well trained.

“At first it was small steps, like making sure he took off his work boots as soon as he got home and took a shower,” she said. 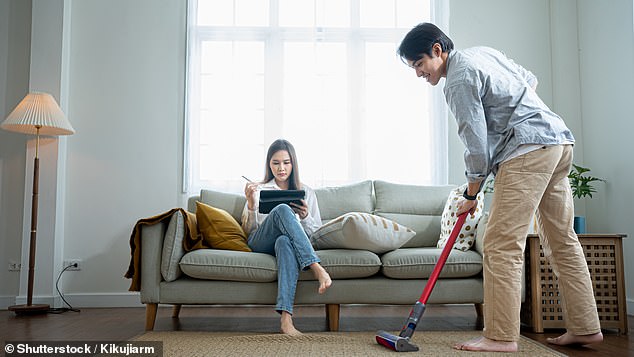 Around a quarter of the 2,000 women surveyed said making sure their husband or partner was ‘obedient’ and ‘moldable’ was a top priority

“I gradually stepped him up and he quickly did the dishes, did the washing and tumble drying and even packed the kids’ lunch boxes.”

The study, commissioned by natural dog treat brand Pooch Snax, found that more than half of women surveyed seek to treat their men like a dog.

“Fifty-four percent seek the same qualities in a partner that they find in their dog,” a spokesperson said.

“Among the main qualities were loyalty, affection, fun and, of course, trainability.”